This is for all the “unattached” runners out there! As a member of two running clubs, I think they’re the best thing since waffle makers. I imagine these points also apply to other sports clubs. If you’ve got any more, drop them in the comments below!

The main one is camaraderie. A whole community. In my case, two. Todmorden Harriers are a fantastic local club, with loads of active members, meaning there’s always a friendly face at local races. Sometimes I even bump into them on the Lakeland fells! Encouragement, support, lifts, training tips, they’re all included. Vegan Runners UK are a national club which has a great online presence, they’re at parkruns everywhere, and when you wear the vest it’s likely someone will yell “Go Vegan!” which is a great motivator. “Go on, Tod!” and “Well done lass!” are pretty good too – the fellrunning, ultrarunning and running communities in general are super supportive, and a club is a quick way of knowing more people.

The kit: who wouldn’t want their local landmark on their back or their ethical stance emblazoned on their chest? It’s an opportunity to be an ambassador, whatever that means. Show people that you can thrive without animal products, represent your local team in a national event, encourage more people to get out there and run. 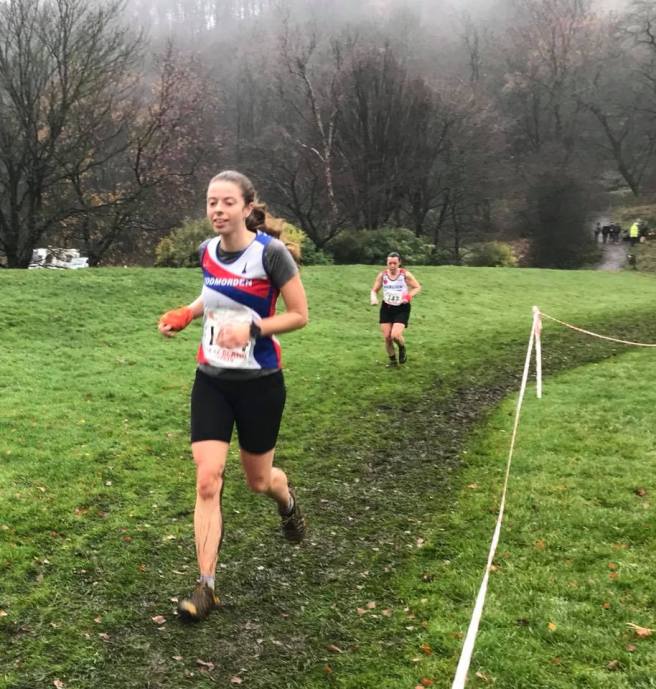 Team team team: Namely cross country, relays and being a team counter in fell races. Practically speaking, there are a few types of races that are only available to club members. As a recovered sport-hater, I never thought I’d enjoy the thrill of carrying a cut-off bit of pipe (“baton”) so much, or the energy-sucking mud of a playing field. Running doesn’t always have to be an individual sport.

An opportunity to give back: Tod Harriers organises several local races, and it is so much fun to wave a cowbell while directing runners round a corner, help at registration or sweep with a friend. I edit the newsletter twice a year which is a super inspiring job, as is helping out with the Monday beginners. Clubs have plenty of volunteering, coaching and committee positions available, which is a great opportunity to widen your skill base and give back.

Training and meetups: Toddies have weekly training and weekly packruns, Vegan Runners have meetups all over the country from park run to long races. My local VRUK group had a particularly memorable training session on Scammonden Dam steps in the rain!

Final word: when you first come to club meets or training, it can sometimes feel a little cliquey. I’ve never found this with the Toddies or VRUK; everyone’s super friendly on meets, although of course there will always be a few inside jokes, as with any tight-knit group. I’ve decided the easiest way to deal with this is to throw myself into training sessions and races, then I quickly had some shared experiences. It doesn’t take long to be ‘one of the gang’.

Vegan? Check out Vegan Runners UK, the fastest-growing athletics club in the UK (people outside the UK also welcome to join). There are various facebook groups, including one for non-members, members, local groups and discipline-specific, such as parkrun, ultra etc.

In Calderdale? There’s loads of info on the Tod Harriers’ website, including past newsletters, race reports and details of meets. We have a facebook group, as does our Monday group. Come along and give it a go!

Neither local nor vegan? Time Outdoors has loads of club listings to peruse.

View all posts by adventureandcake